A prototype of the V- CUBE™6 was first presented in the International Puzzle Party of 2005 in Helsinki, Finland. This was the first time a fully functional 3-dimensional cubic puzzle of over 5 layers was presented to the public and it was received with great enthusiasm. It was immediately perceived as a real breakthrough in the 3-D cubic puzzle games space and for that it received the 1st honourable mention during the event.

Panagiotis Verdes was awarded by OBI for his invention "CUBIC LOGIC TOY" in the context of the "Recent Greek inventions" competition. The ceremony was held in Zappeion and the award was given by the Greek Minister of Development.

V-CUBE™ was recognized as the Top Innovative Company in Greece for 2010, by the Greek Department of Research and Technology. Both the innovative nature of our products, based on our groundbreaking patented technology, as well as the prospects for future development were taken into account for this recognition. 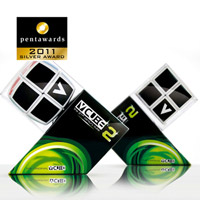 Pentawards is the first on-line global awards competition devoted entirely to packaging design. V-CUBE™ won a silver award in the "Other markets - Entertainment" category for the pioneering V-CUBE 2™ packaging.

Amongst the Pentawards winners this year were some of the most famous brands worldwide like Coca Cola, Jack Daniels, Davidoff and Heineken. The only other toy to have ever won an award prior to that was Pokemon (Silver - 2009).

V-CUBE™ and Matadog Design, the 1st ever entrant from Greece, received a Gold Award in the Retail Packaging category of the 2011 Creativity International Awards.

Creativity International Awards is one of the longest running INDEPENDENT international advertising and graphic design competitions, running since 1970. V-CUBE™, through our designer team Matadog Design, took part in the 41st annual competition for the innovative V-CUBE 2™ packaging. Creativity International received over 1,100 entries into the 95 categories available to both professionals & students in Creativity 41 Print & Packaging. They came from 35 countries, 32 U.S. States & 4 Canadian Provinces.