V-Cube, together with our partner Aquamarine Games in Spain and the Dideco Group of retail stores, known for educational and ecologically-oriented products, organized a super fun and educational day for young V-Fans 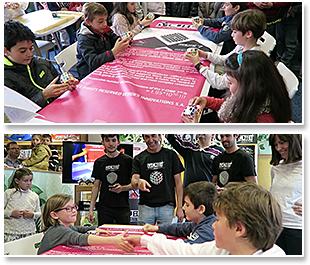 The event took place on April 16th in one of Dideco’s major stores in Madrid where a tutorial on how to solve the V-Cube 3x3x3 was first on the agenda. The excitement skyrocketed with a cube competition consisting of players in couples trying to solve the cube in the shortest possible time to sudden death.

The event ended with an impressive V-CUBE™ blindfolded solve by the well known cube champions Rodrigo Pueblas, a Computer Engineering student, who achieved the 2015 Spanish blind record in 4x4x4 and 5x5x5 cubes and Asier Cardoso, also a student with 5 double degrees in computer engineering and mathematics, who was the Spanish blind 2014 champion in 3x3x3 and 4x4x4 twisty puzzles.

All students were winners receiving a welcoming gift, as well as the great opportunity for a hands’ on learning experience as participants in the V-Cube tutorial.
Of course, the competition winners went home with trophies!!


See the video and catch the mood!!!